Where does your data go? A new publication about Mosquito Habitat Mapper data in GeoHealth

Would you like to know what happens to the data you submit to the GLOBE Observer app? All GLOBE data are open, which means they are readily accessible and available for analysis by anyone who has a research question to explore, including citizen scientists, community members, students and research scientists. On August 19, GLOBE Observer scientists Rusty Low and Peder Nelson, GLOBE International STEM Network scientist Becky Boger, and citizen scientist Matteo Kimura published a new scientific paper about GLOBE mosquito data reported by citizen scientists.

The paper looks at data submitted during the Mosquito Habitat Mapper’s first three years (2017-2020) in Africa, Asia and the Pacific Islands, and Latin America and the Caribbean. It also takes a closer examination of data in three cities in Senegal, West Africa.

The data reported by citizen scientists was analyzed by the authors and subjected to a series of procedures to ensure the quality of the data set. This included examining photo voucher data for duplicate reports, and ensuring all data used in the analysis included accurately reported locations. Container larval habitats were most frequently reported in the data examined in this study (greater than 80%). In the Africa and Asian Pacific regions, most containers identified were cement, metal, or plastic tanks. In the Latin America and Caribbean regions, more jars and intentionally set mosquito traps were reported.

Photos submitted by citizen scientists were used in the paper to illustrate three different kinds of mosquitoes reported. In this figure from the paper, images of the three most medically significant mosquito taxa were obtained from GLOBE Observer Mosquito Habitat Mapper submissions. 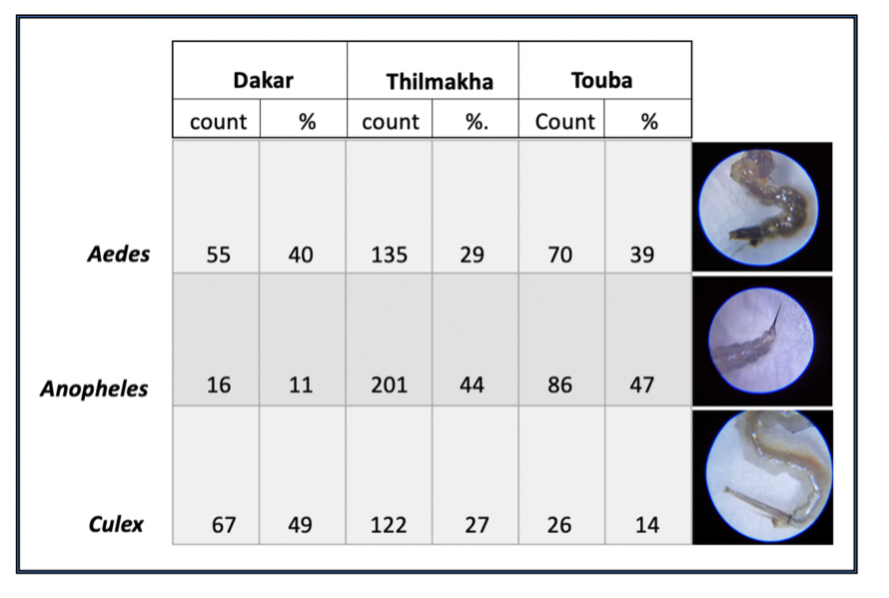 Mosquito genera reported by raw count and percent of total identified specimens for three cities, Dakar, Thilmakha and Touba, Senegal. Representative images submitted by Senegalese citizen scientists for each of genera collected by the GLOBE Observer Mosquito Habitat Mapper are pictured on right.

The data show that citizen science is an effective strategy to engage individuals in larval habitat mitigation, while simultaneously obtaining necessary data that support research on mosquito vector-borne disease. The paper also describes how GLOBE data contribute to an international effort to reduce the risk of mosquito vector borne diseases in communities.

The open access article can be found in the journal GeoHealth: