What is GLOBE Observer Eclipse?

GLOBE Observer Eclipse is a temporary tool in the GO app that will help you document air temperature and clouds during an eclipse. The tool is not visible in the app on a regular basis, but is only opened up when a solar eclipse is happening somewhere in the world. The Eclipse tool will prompt you to take air temperature measurements using a meteorological thermometer, as well as taking regular observations of sky conditions using the Clouds tool. For more details about equipment needed, how to take observations, and frequently asked questions, visit the Taking Observations page. Our Resource Library includes additional activities, references and videos.

Why are my observations important?

The Earth is solar-powered. So what happens when the Sun's light is blocked, even temporarily? If you measure air and surface temperature, how cool is an eclipse?

During an eclipse, citizen scientists are able to:

While the Eclipse tool is not regularly available in the app, we plan to reopen it for future eclipses that pass through GLOBE countries. In between eclipses, we have some examples of how to analyze and graph GLOBE eclipse data, and you can download curated eclipse data sets for your own explorations.

NOTE: The Eclipse tool is expected to be available in the GLOBE Observer app on 07 December 2020, a week before the total solar eclipse in South America on 14 December 2020. The visibility of the tool will be geofenced to the general region of the eclipse, and will only be visible to users in the box bounded by latitude -70 to 3 and longitude -100 to -25. You can still make clouds observations any time, and from anywhere in a GLOBE country.

During the total solar eclipse on 21 August 2017, with a path of totality spanning the United States, more than 10,000 observers helped us collect over 20,000 cloud observations with 60,000 photos and 80,000 air temperature measurements to answer these questions and others using the GLOBE Observer app. (See the 2017 version of this page.)

For the total solar eclipse on 02 July 2019, the path of totality went across Chile and Argentina. An area with less overall population than the 2017 eclipse, we received 73 clouds observations and 1727 air temperature measurements on the day of the eclipse.

The video below was created for the eclipse in August 2017, but explains why NASA needs your help making observations during any eclipse.

In addition to research done by professional scientists, because GLOBE Observer is part of the GLOBE Program, which is active in thousands of schools across the world, citizen scientists are strengthening science education by providing data for student research.

Here are a few examples of student research reports related to eclipses:

For a full listing of research reports on a variety of topics, visit the GLOBE Student Research Reports page.

The next total solar eclipse will take place on 14 December 2020 and will pass across the southern part of South America, slightly further south than the path of the eclipse on 02 July 2019. The eclipse will begin over the Pacific Ocean, and the lunar shadow will enter South America near Lago Budi, Chile and end near Las Grutas, Argentina. Outside this path, a partial solar eclipse will be visible in the rest of Chile and Argentina as well as Bolivia, Paraguay, Uruguay and parts of Ecuador, Peru, and Brazil. To find out exactly how much of the eclipse a particular location will experience, visit this website. You can also find a full listing of upcoming solar eclipses (total, partial and annular) here. 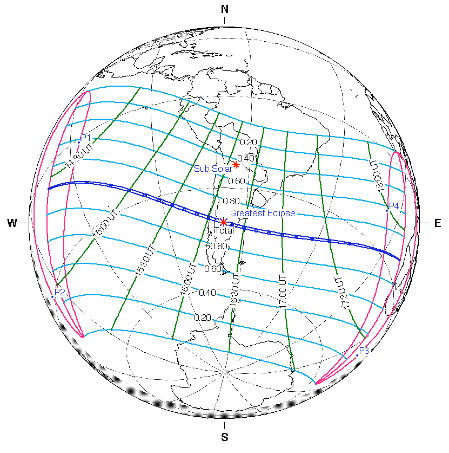