Published Results from GO on a Trail Challenge

In 2019, you joined us on the trail by submitting more than 18,000 land cover photos from 37 countries during our GO on a Trail challenge. On April 22, a peer-reviewed scientific analysis of the data was published in Frontiers in Climate. The paper summarizes the data submitted during the challenge, describes how your data are matched to satellite-based land cover products and outlines how GLOBE Observer observations could help scientists in the future.

You sent us observations from places that had not been documented with GLOBE data before. Australia Scouts provided observations of remote stretches of interior Australia. Seventy percent of the challenge data came from the United States, with most of those observations falling along the Lewis and Clark National Historic Trail. Other top data locations included Australia, Poland, the United Kingdom, and Thailand. 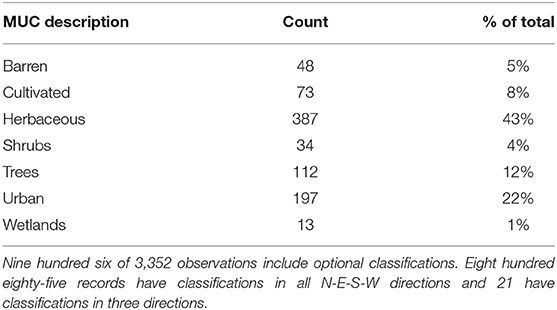 The most common land cover type you observed during the challenge was grassland followed by urban or developed land. We compared your classifications to the MODIS Land Cover Product, a global land cover map made from data collected by the Moderate Resolution Imaging Spectroradiometer on NASA’s Terra and Aqua satellites, and found that they matched perfectly 53 percent of the time. Ten percent of your classifications were a near match. The remaining 37 percent were different from the satellite-based product. Your observation may be different from satellite data for many reasons. The land cover may have changed since the satellite data were collected. Alternatively, the difference may be one of scale: for example, you mapped a grassy park in a city block, which the satellite classifies as urban and you classified as cultivated grass. Finally, the satellite data or your data may be misclassified.

With the documentation provided in this new publication, your data becomes more available for researchers who want a record of land cover to improve satellite-based data products or to study directly. Land cover data are important in studying a range of topics including climate change, disaster risk, carbon cycle, and more. The GO on a Trail data are available in the data section of our website.