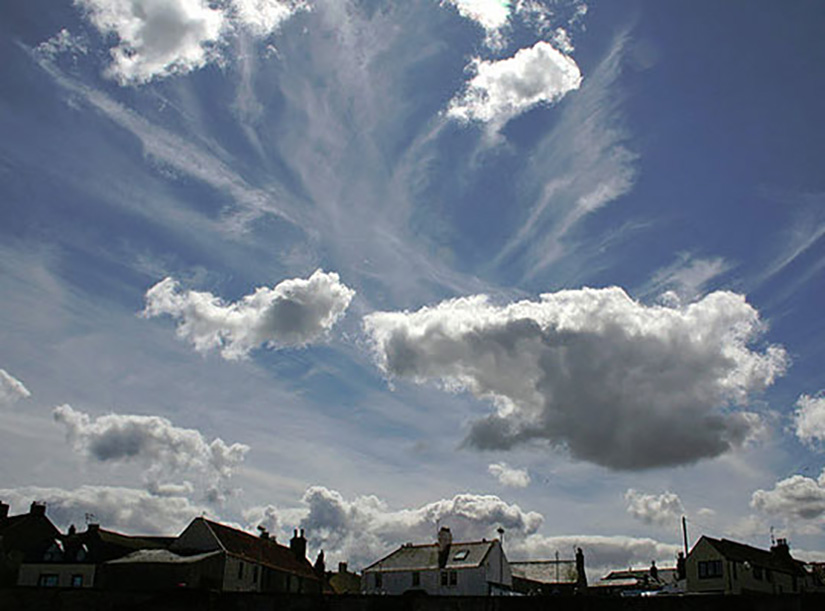 Weather predictions, musings and more in this week's roundup.

1. IMAGE OF THE WEEK: Clouds are useful for predicting the weather. Do you know the following saying: "Red skies at night, sailors delight. Red skies in morning sailors fair warning." See the image above? What does it predict? Learn what in the article below. The above image was taken by G. White.

Here are a few lyrics from her song titled "Both Sides, Now" from the album Clouds:

I've looked at clouds from both sides now
From up and down, and still somehow
It's cloud illusions I recall
I really don't know clouds at all"

Don't the clouds in the picture look like what Mitchell is describing in her song?

This is what Sagan said about an image of the Earth:

“Look again at that dot. That's here. That's home. That's us. On it everyone you love, everyone you know, everyone you ever heard of, every human being who ever was, lived out their lives. The aggregate of our joy and suffering, thousands of confident religions, ideologies, and economic doctrines, every hunter and forager, every hero and coward, every creator and destroyer of civilization, every king and peasant, every young couple in love, every mother and father, hopeful child, inventor and explorer, every teacher of morals, every corrupt politician, every "superstar," every "supreme leader," every saint and sinner in the history of our species lived there -- on a mote of dust suspended in a sunbeam."

4. PREPARATION: There will be a special supermoon on Monday, 14 November. You can prepare to view it by tuning in to NASA's Facebook page for a Facebook LIVE event at 10 am PT (1 pm ET) on Friday 11 November.

5. PICTURES: See this week's favorite cloud observation submissions on our Facebook page. We release a new video each week, so keep coming back there for more. You just might see the picture you submitted while using the the #NASAGO app.

EXTRA: Did you remember to set your clock back on Saturday/Sunday? See last week's blog post for more information.