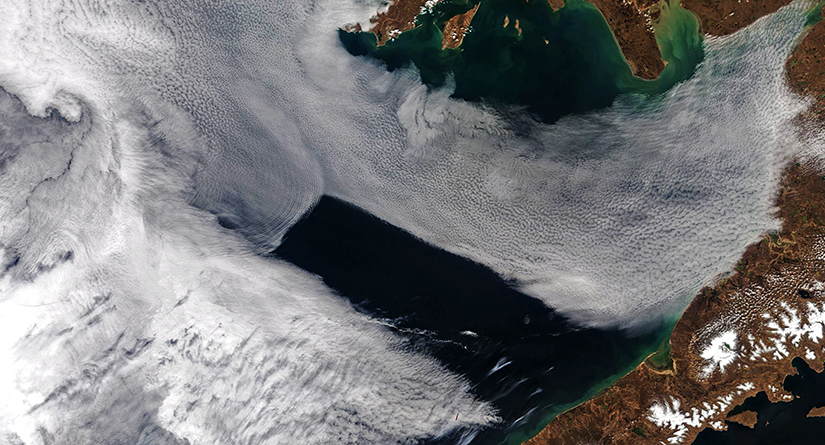 Learn about app development and how to use our new Mosquito Habitat Mapper. This and more in this week's roundup.

1. IMAGE OF THE WEEK: The above image was taken on 14 May 2017 by the MODIS instrument on NASA's Terra satellite.

"Clouds take on some stunning forms—an indication of unseen processes at work in the atmosphere. The wave clouds visible in this image over Bristol Bay in southwest Alaska are the result of two air masses colliding.  ... The clouds are likely stratocumulus—a low-level cloud similar to cumulus, but larger."

2. WEBINARS: You are invited to join us for one of two webinars to learn more about the GLOBE Observer's app new Mosquito Habitat Mapper (MHM).

At the webinars, GLOBE Observer will also share the research that is taking place to identify the spread of mosquito borne diseases, which includes the use of satellite technology to identify environmental conditions that enable mosquitoes to thrive. Each institution participating in the Global Experiment can identify the mosquito season for its region prior to the activity, so it can host events during the time when mosquitoes are active locally and can determine the level and kind of involvement that matches its programming objectives.

3. FACEBOOK LIVE: Ever wonder how an app for NASA is developed? Learn how in a special Facebook Live event this week on our Facebook page.  Tune in on Tuesday, 06 June at 2:30 PM PDT (5:30 PM EDT).

"Engaging the public in scientific research is beneficial to society as a whole on various levels, for example it enables citizens to gather critical data in areas where it may not be possible by scientists on a regular basis."

Learn more about Dr. Anyamba in the link below.