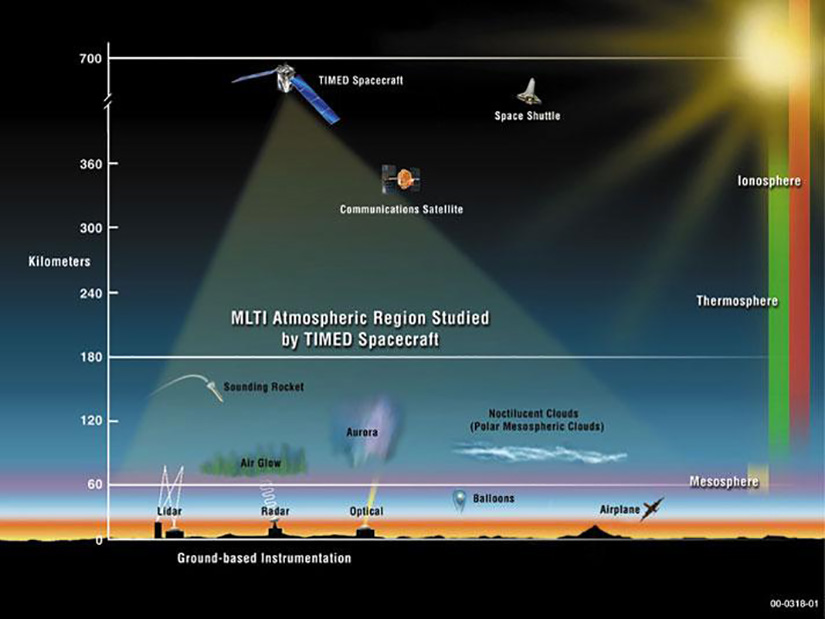 A question, a couple of space missions to remember, a few notable scientists, and more in this week's roundup.

1. IMAGE OF THE WEEK: Wednesday is the 15th anniversary of the launch of two Earth-science missions: Jason-1 and TIMED (see the image above). These two separate missions were launched together in the same launch vehicle from Vandenberg Air Force Base in California.

Jason-1 was a mission to study the ocean, but was decommissioned in July 2013. TIMED was sent to study the mesosphere and lower thermosphere/ionosphere (MLTI) region of Earth's atmosphere and continues to do so. (This mission has received quite a few mission extensions.) This area of the atmosphere stretches from about 40 to 110 miles above the surface of the Earth and is where incoming energy from the sun transforms into the lights of the aurora. This is also where glowing night-time noctilucent clouds appear, and where a dynamic electromagnetic system experiences space weather effects that can interrupt man-made satellites and human communications. See the our Facebook page for an example of noctilucent clouds.

Saturday will be Griffith Park Observatory's monthly public star party. (This observatory is based in Los Angeles and was founded in 1935.) There will be plenty of telescopes and amateur astronomers on hand to answer your questions. This event is free and goes from 2 - 10 pm PST. This observatory has a great view of the sky and city and would make for a great location for you to take some #NASAGO cloud photos while you are there too.

Did you know that the Zeiss telescope at the observatory has had the most people view the sky with it than any telescope in human history?

3. NOBEL: Saturday, 10 December is also the 115th anniversary of the first Nobel Prize award ceremony. Prizes are awarded for several areas of science, literature and for peace. Some notable winners include: Albert Einstein, Marie Curie and Max Planck.

2016's recipients will be awarded on Saturday in Stockholm, Sweden.

5. RECOMMENDATION: Have you seen Only Yesterday? This film from Japan was first released in 1991 – 25 years ago this year. (Hayao Miazaki was the film's general producer and it was directed by Isao Takahata.)

In the film, the story’s heroine Taeko is asked by a school mate named Hirota (he has a crush on her):