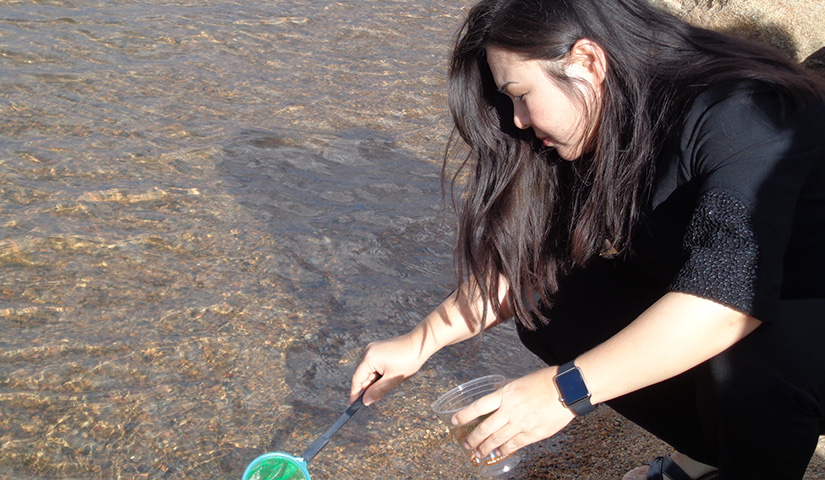 It's Memorial Day Weekend in the United States. Have plans for the long weekend?  Heading out of doors, perhaps? In this week's round up you will find activities you can do, anniversaries to remember, and more.

1. IMAGE OF THE WEEK:  The above image shows Mullica Jaroensutasinee (who is a Master Trainer for the GLOBE Program in Thailand) doing the GLOBE Mosquito Protocol during the GLOBE Annual Meeting last August in Colorado.

Starting this week, citizen scientists all around the world will now have the opportunity to gather mosquito data with their cell phones. Check out or download the GLOBE Observer app on Monday for the new Mosquito Habitat Mapper (MHM) and start taking data about mosquitoes.

2. MEET THE SCIENTISTS: Meet Dr. Sara Paull. She is a post-doctoral fellow at the National Center for Atmospheric Research.  She says:

"The mosquito data collected by citizen scientists through GLOBE Observer will be very useful for helping me to gain a more detailed understanding of how temperature and rainfall influence the beginning of the mosquito season and the risk of West Nile Virus transmission."

Continue reading more about her in the link below.

3. ANNIVERSARY: Monday marks the 100th anniversary of the birth of U.S. President John F. Kennedy.  It is through Kennedy's leadership that the United States sent men to the Moon and also viewed the Earth as a system from space.  And who can forget our first views of the planet and the wonderful clouds we saw encircling the globe.

Make plans to take some "down-to-Earth" cloud observations this Monday.  Don't know how? Check out the links below.

4. SPACEWALK: 52 years ago this Saturday, Astronaut Ed White became the first American to conduct a spacewalk.

"The EVA started over the Pacific Ocean near Hawaii and lasted 23 minutes, ending over the Gulf of Mexico. Initially, White propelled himself to the end of the 8-meter tether and back to the spacecraft three times using the hand-held gun. After the first three minutes the fuel ran out and White maneuvered by twisting his body and pulling on the tether.

In a photograph taken by Commander James McDivitt taken early in the EVA over a cloud-covered Pacific Ocean, the maneuvering gun is visible in White's right hand. The visor of his helmet is gold-plated to protect him from the unfiltered rays of the sun."