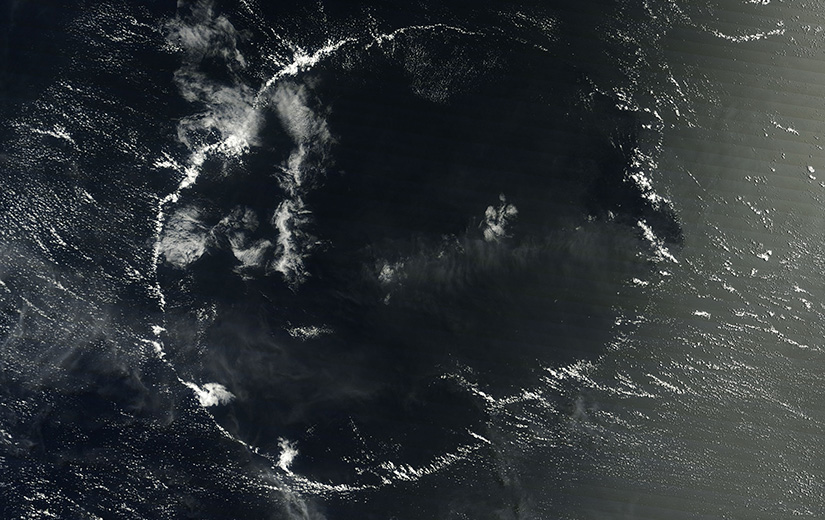 First impression are not always what they seem. What about cloud impressions? Clouds are always clouds, but sometimes they can look like something else. How about an elephant? Cloud shapes, a birthday, some poetry, and more in this week's roundup.

1. IMAGE OF THE WEEK: The above image -- taken in September two years ago -- was acquired by the Moderate Resolution Imaging Spectroradiometer (MODIS) on NASA’s Terra satellite and shows a circular shape made up of clouds.

"While circular clouds like this can form in several situations, this particular cloud formation likely began when the sun heated a parcel of air that happened to be over a small island or patch of warm ocean water. As the warm air became buoyant and rose, cumulus clouds and eventually patches of light rain probably developed. The rain would have cooled the air beneath ..." keep reading to learn more by clicking on the link below.

2. POETRY: A poem by Percy Bysshe Shelley.  Guess what he is describing -- if I told you the title it would be too obvious:

"I bring fresh showers for the thirsting flowers,
From the seas and the streams;
I bear light shade for the leaves when laid
In their noonday dreams.
From my wings are shaken the dews that waken
The sweet buds every one,
When rocked to rest on their mother's breast,
As she dances about the sun.
I wield the flail of the lashing hail,
And whiten the green plains under,
And then again I dissolve it in rain,
And laugh as I pass in thunder.

I sift the snow on the mountains below,
And their great pines groan aghast;

3. CITI SCI CONFERENCE: Want to join the Annual Citizen Science Association conference to be held in May 2017 in Saint Paul, Minnesota?  You can also submit your own abstract -- deadline is 10 October 2016.  Learn more in the link below.

Here is what NASA had to say about itself:

"Since its founding on October 1, 1958, NASA has pushed the boundaries of human exploration. We've put footprints on the moon and tire tracks on Mars. We've given the world breathtaking images of our home planet, our solar system and the galaxies beyond. We invented the first re-usable spacecraft and, with our international partners, established a permanent human presence in space. Along the way, we've pioneered new technologies that have improved people's lives."

5. IN OTHER VIEWS: Want to see some of the images that have been submitted via the GLOBE Observer app?  Check out the link below for a short video on our Facebook page and keep those observations coming. Maybe you will see and share some interesting cloud shapes with us -- we can't wait to see them.