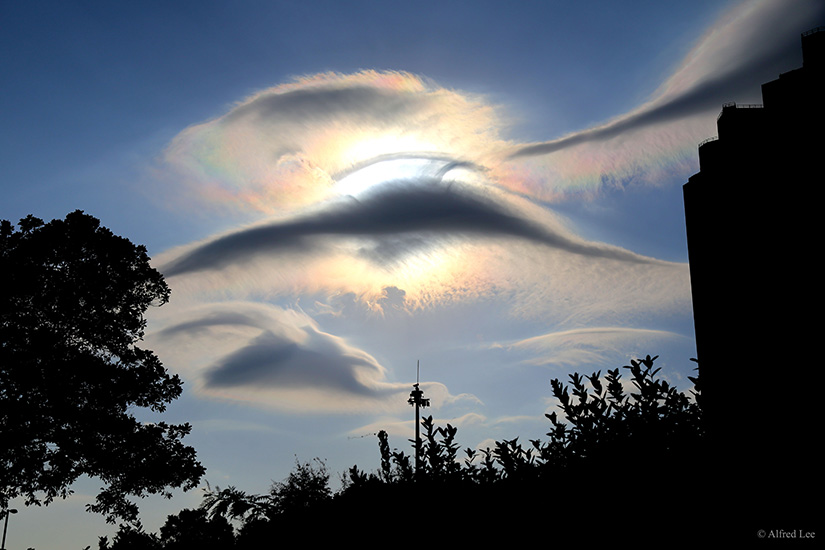 This week is full of fun opportunities. Plus, plan your Halloween costume in this week's roundup.

1. IMAGE OF THE WEEK: This image was taken by Alfred Lee and shows two unusual clouds high in the sky over Hong Kong, China.

Here is what NASA's Astronomy Picture of the Day (APOD) had to say about this image and the clouds:

"In the foreground was a long lenticular cloud, a cloud that forms near mountains from uprising air and might appear to some as an alien spaceship. Higher in the sky, and further in the background, was a colorful iridescent cloud. Iridescent clouds are composed of water droplets of similar size that diffract different colors of sunlight by different amounts. Furthest in the background is the Sun, blocked from direct view by the opaque lenticular, but providing the light for the colors of the iridescent. Either type of cloud is unusual to see in Hong Kong."

2. SERIES: The World Series starts on Tuesday, 25 October.  Are you going?  Why not share with us cloud images taken from the stadium? They might just make it in our weekly video. See last week's pictures in the link below.

3. PICASSO: Tuesday is the 135th anniversary of the birth of artist Pablo Picasso. Picasso carved into linoleum a picture of figures with clouds in the background in 1962.  It is titled: "Bacchanal with Four Clouds." View it in the link below.

4. HALLOWEEN: Are you or your children dressing up in space-themed costumes this Halloween? Share images with NASA on social media using the hashtag #NASACostume.

5. ENCHANTED SKIES: Want a chance to observe some night-time skies?  You can participate in the Enchanted Skies Star Party -- takes place this Wednesday through Saturday in Magdalena, New Mexico. This star party is in its 23rd year and offers both single- and multiple-day rates. Learn more and how to register in the link below.