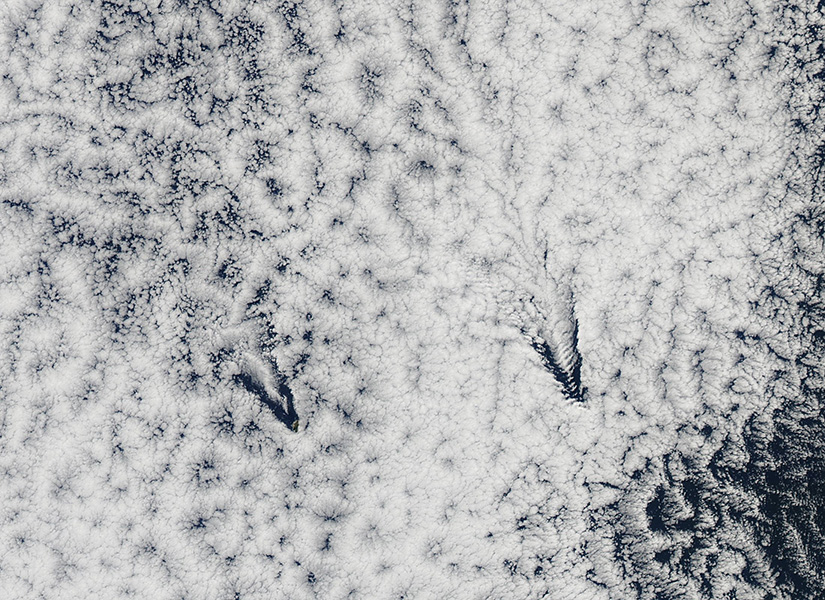 Dreaming of a get away to a far away land?  Perhaps somewhere tropical with beautiful skies full of clouds?  Even if you cannot get there in person, you can still learn more about the places of your dreams. Virtually travel anywhere and more in this week's roundup.

1. IMAGE(S) OF THE WEEK: The Moderate Resolution Imaging Spectroradiometer (MODIS) on NASA’s Aqua satellite captured this natural-color image of the Juan Fernandez Islands six years ago on 29 April.

"Two small islands produced big effects in the atmosphere off of Chile in late April 2011.

Isla Alejandro Selkirk and Isla Robinson Crusoe are both volcanic islands arising from an east-west submarine ridge. The islands are barely visible in this image, but their effects on nearby clouds are obvious. Poking up from the ocean surface, the islands create obstacles to air movement, such that wind blowing over each island creates a giant V shape of cloud-free air, with the island at the base."

2. ISLAND: One of the two Islands in the above image is named for the character of the book of the same name: Robinson Crusoe. It happens that Tuesday marks the 298th anniversary of the publication of the book. This island adventure was written by Daniel Defoe, and is thought by many to be the first English novel.

3. GLOBAL TRAVELER: If you could go anywhere, where would you go? Would you take cloud observations while there?

Even if you cannot go to another place soon, why not discover more about your planet with NASA's DSCOVR: EPIC site. This website provides global views of the Earth from the day before in beautiful resolution.

4. EXPLORE: Here is another idea for your virtual travel of the Earth.  Did you participate in the Earth Day #AdoptThePlanet event? Explore locations on Earth and take a look at the data of individual portions of the planet in the second link below.