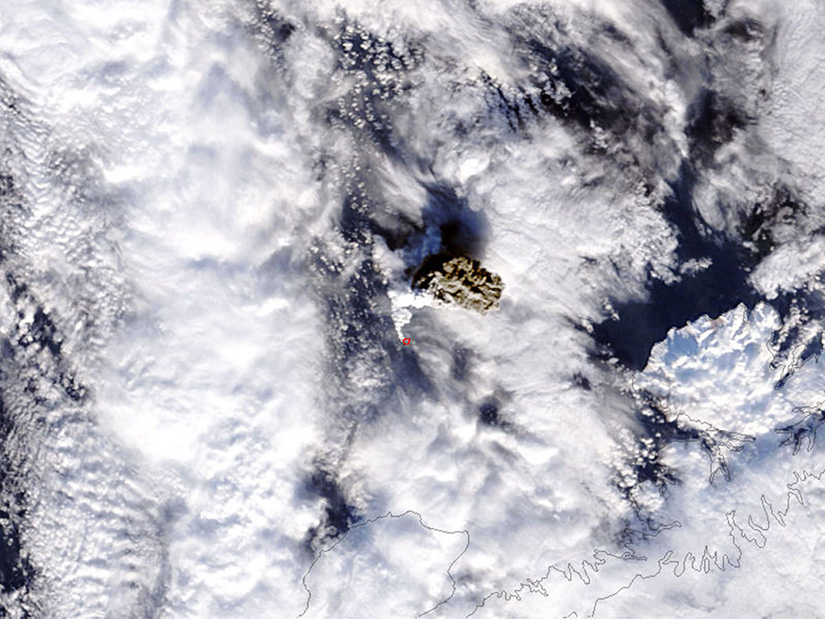 The more we observe, the more we attune our eye. Sights, views and more in this week's roundup.

1. IMAGE OF THE WEEK: What do you see in the image above? Definitely a dramatic landscape of clouds. However, on closer inspection, you will notice a darker plume in the center of the image.

"On January 18 at 5:35 p.m. EST (2235 UTC) the Moderate Resolution Imaging Spectroradiometer or MODIS instrument flies aboard both NASA's Terra satellite captured a visible image of the volcanic ash plume which appeared dark brown. The plume stood out in the image because it appeared in the middle of white clouds associated with the southern quadrant of a low pressure system. The low pressure center was north of the area."

2. SOCIETY: An image of a volcanic mountain (Mount Fuji in Japan) with orographic clouds above it was the National Geographic Society's "Photo of the Day" this last Friday. You too can submit your cloud images to the NGS. Maybe you will one day be a featured photographer. (Also note NGS' monthly themes and challenges for submissions.)

AND, this coming Friday happens to be the 129th Anniversary of the founding of the Society.

3. EYES IN THE SKY: Two of the NASA satellites that take cloud data from space are Cloudsat and Calipso.

"For [over] a decade, the CloudSat and CALIPSO satellites have used radar and lidar to “slice” through clouds and plumes of atmospheric particles to gain a better understanding of the vertical structures of the ephemeral features."

4. ART AND SCIENCE: I just love it when science and art connect and overlap. One Italian astrophysicist named Gianluca Masi, who will celebrate his 45th birthday this Sunday (January 22, 1972), is known for pin pointing the date of Van Gogh's "Starry Night over the Rhône" painting by looking at the star patterns seen in the work.

Masi also provides access to telescopes for observers all around the world through the Virtual Telescope Project.

5. YOUR SHOTS: I bet you have been finding great photography moments when using the app -- the weekly video shows your artistic eyes. See last week's favorite cloud observation submissions from around the world on our Facebook page. And don't forget to share your favorite photos with us by tagging us on Facebook and Twitter: #NASAGO.

EXTRA: Remember I talked about looking for and finding beauty back in September? (Read that post, here.)