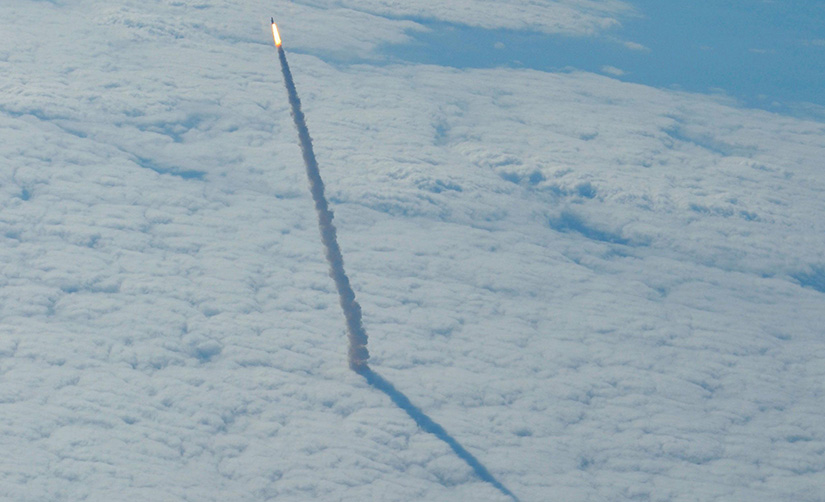 Devising plans for the upcoming days/weeks/months? We have a few for your weekend. If you are more spontaneous than that do not read the below.  Rockets, satellites, shooting stars, and more in this week's round up.

1. IMAGE OF THE WEEK: The above image -- taken in 2011 -- was taken from a shuttle training aircraft and shows NASA's Space Shuttle Endeavour cutting through a blanket of clouds as it heads toward Earth orbit in order to rendezvous with the International Space Station (ISS).

2. FATHER OF ROCKETRY: Wednesday, 5 October is the anniversary of the birth of Robert Goddard (1882-1945). Goddard is the "Father of Modern Rocketry." His contributions to rocket science makes it possible for us to send satellites up into space -- satellites like Cloudsat, Aqua and more.  Learn more about the man and the machines in the below. Want to know something else? The first Earth satellite, Sputnik, was launched on 4 October in 1957.

3. OBSERVE: And speaking of satellites.  Did you know that the moon is a natural satellite of the Earth? You can learn more about this satellite by participating in this year's International Observe the Moon Night (InOMN) -- it's Saturday, 8 October.

4. SHOWER: Saturday is also the peak of the Draconid meteor shower. After observing the clouds on Saturday, stay up late and observe the moon or maybe spot a few shooting stars.

5. DESCRIPTIVE: The book The Red Badge of Courage by Stephen Crane was published 121 years ago in 1895 come Monday 3 October.  Here is a short passage from the novel:

“Over the river a golden ray of sun came through the hosts of leaden rain clouds.”

Seeing any rain clouds in your area?  How would you describe them?

EXTRA: See this week's favorite cloud observation submissions on our Facebook page.  We will be releasing a new video each week, so keep coming back there for more.  You just might see the picture you submitted while using the the #NASAGO app.