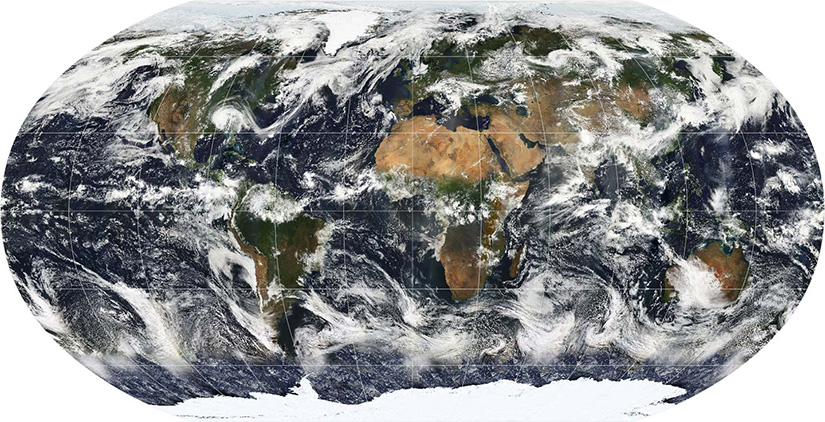 Clouds, mosquitoes and more in this week's roundup.

1. IMAGE OF THE WEEK: This image from just about 12 years ago (11 July 2005), shows a map of the Earth and its global cloud cover. It is based largely on observations by the MODIS sensor on the NASA Terra satellite.

"The interaction between atmospheric circulation in the tropics and sub-tropics and cloud structure is highly correlated. Interestingly, changes in the circulation and the consequent shifts of cloud cover lead to differing warming/cooling effects in the northern and southern hemispheres ..." Keep reading in the link below.

2. HEAT WAVE:  Have you been experiencing a heat wave?  There have been quite a few.
This week, over 100 years ago, the New England area of the United States had a massive heat wave. See page nine of the first link below to learn more about it.

Another event that can sometimes accompany a heat wave is a drought.  And droughts can lead to dust storms.  Remember the great "Dust Bowl" of the 1930s? Dust can have an adverse effect on cloud formation -- this is what happened during the Dust Bowl.

"Dust clouds reflect sunlight and block solar energy from reaching the surface. That prevents evaporation that would otherwise help form rain clouds, meaning that the presence of the dust clouds themselves leads to less rain ..." Keep reading in the third link below.

3. DISCOVERY CHANNEL: As many of you know, NASA GLOBE Observer currently has two observation areas (a third limited edition Solar Eclipse app feature will debut in the coming weeks -- so look for that soon). They are: Clouds and the Mosquito Habitat Mapper (MHM). So I know that this program will be of interest to you, especially if you are excited about MHM. This week, The Discovery Channel will premier a program titled: "Mosquitoes." Watch the preview in the link below.  Starts at 9 PM on Thursday, 6 July

4. APP: Remember that with the Mosquito Habitat Mapper, you can help to eliminate mosquito breeding grounds, stopping the spread of deadly diseases.  This is so important. If you haven't already, make it a goal this week to remove at least one mosquito breeding site.

A blog on NASA Earth Observatory, titled: "Time to Hunt Some Blood-Sucking Bugs," had this to say: