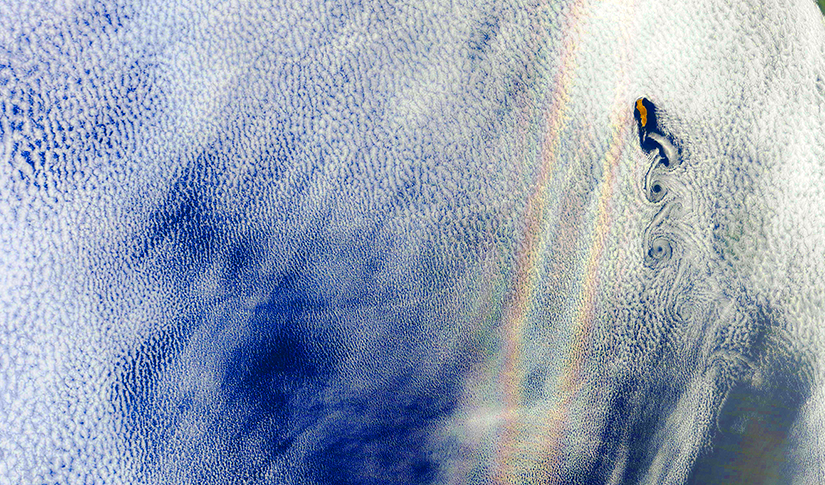 So far, GLOBE Observer has been focused on cloud citizen science, but we have more citizen science opportunities coming your way.  See a preview of what is to come in the below. This and more in this week's roundup.

1. IMAGE OF THE WEEK: The above picture may look like it has a rainbow in it, but this is in fact what is called a "Glory."

"A layer of stratocumulus clouds over the Pacific Ocean served as the backdrop for this rainbow-like optical phenomenon known as a glory. Glories generally appear as concentric rings of color in front of mist or fog. They form when water droplets within clouds scatter sunlight back toward a source of illumination (in this case the Sun). The Moderate Resolution Imaging Spectroradiometer (MODIS) on NASA’s Terra satellite acquired the image on 21 June 2012. The image was saturation-enhanced to make the glory effect more visible."

Learn more about this image and glories in the below.

(The color in this image has been enhanced for ease of viewing in this blog post.  See the original color in the below link.)

2. SKIES: Monday 3 April is National Find a Rainbow Day.  Without clouds, there wouldn't be rain.  No rain = no rainbows in the sky. Learn more about rainbows in the below.

3. MOSQUITOES: You can watch a web episode about the upcoming GLOBE Observer: "Mosquito Habitat Mapper" in the below.  GLOBE Observer is proud to be featured in The Crowd & The Cloud, a new four-part documentary about the power of citizen science. The series premieres Saturday, 1 April. Tune in to your local public television station or watch it on crowdandcloud.org. Episode 3 is “Viral vs Virus.”

4. BUG: Speaking of mosquitoes ... have you ever noticed that some people get bit more often than others?  Learn why in the below.