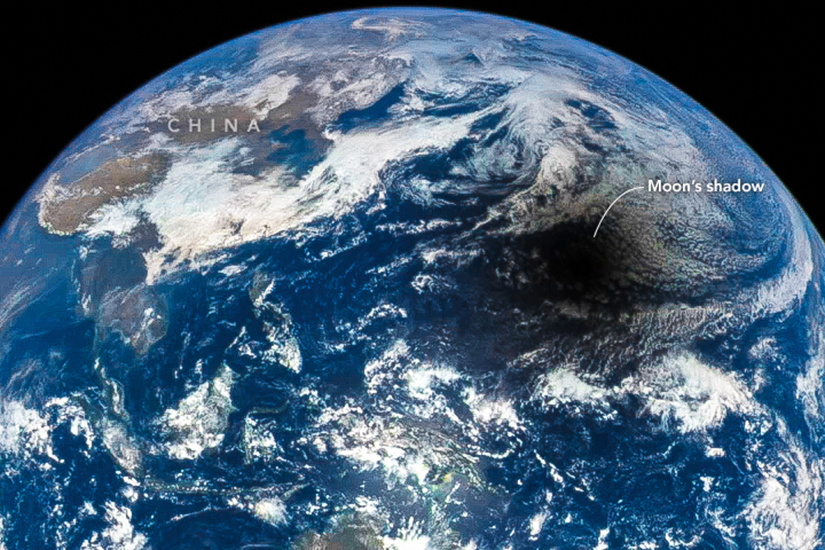 The eclipse is coming, National Moon Day and more in this week's roundup.

1. IMAGE OF THE WEEK: The above is an image of a past total solar eclipse moving across the South Pacific Ocean on March 9, 2016. Do you see the shadow of the Moon on the surface of the Earth?

2. GREAT MOMENTS:  The Moon is going to take center stage next month.  Get ready for the August 21 total solar eclipse by checking out our eclipse page on this website and learn how you can participate as a citizen scientist.  It also happens that this week, 48 years ago, the first men walked on the Moon. (Thursday is National Moon Day.)

"On July 20, 1969, Neil Armstrong became the first human to step on the moon. He and Aldrin walked around for three hours. They did experiments ..." Keep reading in the first link below.

3. BROADCAST: This Friday, tune into NASA for special content concerning the upcoming solar eclipse and how you can participate in our NASA GO eclipse observation.

4. TSUNAMI: Friday is also the anniversary of a tsunami that hit Alexandria, Egypt back in AD 365.

“When a tsunami forms and moves across the ocean, the crests and troughs of its waves compress and extend the air above them, creating motions in the atmosphere known as internal gravity waves. The undulations of internal gravity waves are amplified as they travel upward into an atmosphere that becomes thinner with altitude. When the waves reach an altitude of between 300 to 350 km, they cause detectable changes to the density of electrons in the ionosphere. These changes can be measured when GNSS signals, such as those of GPS, travel through these tsunami-induced disturbances.”