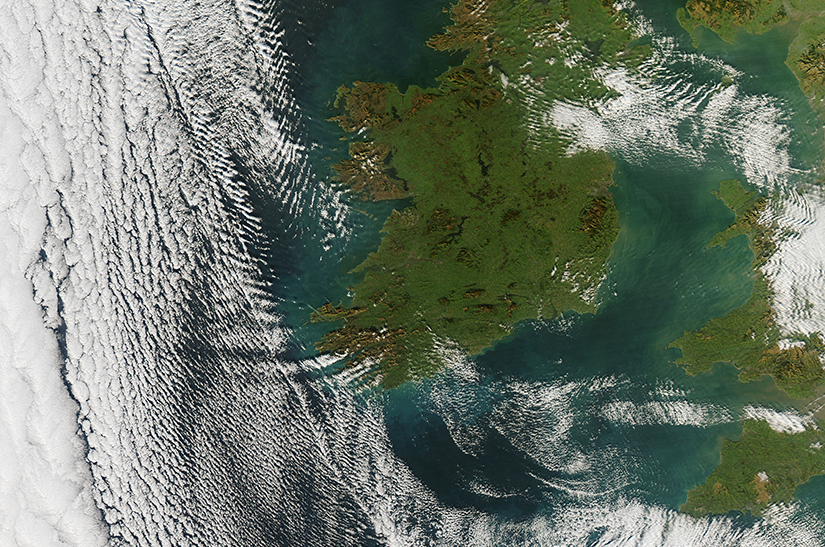 Two visionaries, a slice of pi and an "Emerald Isle" in this week's roundup.

1. IMAGE OF THE WEEK: See the clouds over the ocean and the clear skies above the island in the image above?  A high-pressure system could be the cause of the clear and cloudy skies.

"Cold, dry air sinking over the islands and the waters to the northeast would be relatively cloud-free. Once the air spread out over warmer water, clouds would form."

Can you guess what island is in the above picture? Find out and learn more in the link below.

"Einstein's many visionary scientific contributions include the equivalence of mass and energy (E=mc2), how the maximum speed limit of light affects measurements of time and space (special relativity), and a more accurate theory of gravity based on simple geometric concepts (general relativity)."

3. THREE, POINT, ONE, FOUR: Tuesday is also pi day.  How many numbers of this mathematical constant do you have memorized?

4. LIQUID FUELED: Thursday marks the 91st anniversary of the first launch of a liquid-fueled rocket.

EXTRA: Did you miss our Facebook Live and Q&A on what’s new with NASA's GLOBE Observer App?  Watch it for the first time or again on our Facebook page.