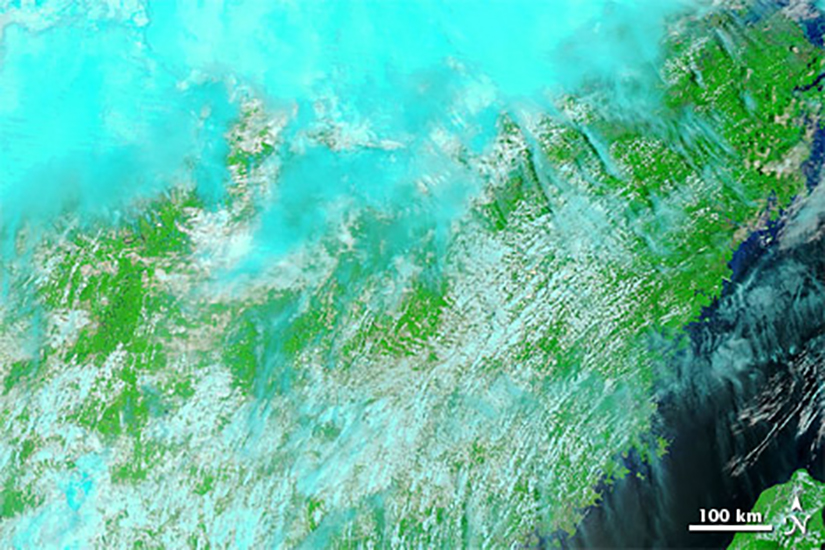 Clouds and floods and landslides and more in this week's roundup.

1. IMAGE OF THE WEEK: The above image was taken just about six years ago by MODIS, however, clouds are obscuring the view of the land which had been flooded.

"Multiple factors limit our ability to show floods, but perhaps the biggest is cloud cover. In a hurricane image, the clouds are the story. When it comes to flooding, clouds often hide the very trouble they have caused. An overflowing river or standing water on agricultural fields cannot be observed until clouds clear out of the way. Sometimes cloud cover lingers until the high water has receded.

And just as some parts of our planet are frequently sunny, other places—including some of the places frequently affected by floods—are consistently ..."  Keep reading by clicking on the link below.

2. LANDSLIDES: Recently, monsoon weather has been inundating Sri Lanka.  Unlike the image above, we were able to gather images showing the flood grounds with minimal cloud cover.  Check out the first link in the below to see the flood lands.

And if you would like to learn more, or have kids who are interested in extreme events you may want to check out the latest issue of NASA EO Kids. (Monsoons and soil saturation can often lead to landslides. And landslides have been occurring of late.)

"During the 70.8 hour flight, Vostok 6 made 48 orbits of Earth. Upon completion of her mission, Tereshkova was honored with the title Hero of the Soviet Union. She never flew again, but she did become a spokesperson for the Soviet Union. While fulfilling this role, she received the United Nations Gold Medal of Peace."

4. ICYMI: Did you watch our Facebook Live broadcast last week?  If not, or if you would like to view it again, you can access it by clicking on the direct link below.

This Facebook Live explores the process of developing an app such as NASA GLOBE Observer with a few of the members of the app development team.  Also, during the video you can watch a short tutorial on how to perform mosquito observations with the new NASA GO Mosquito Habitat Mapper (MHM).