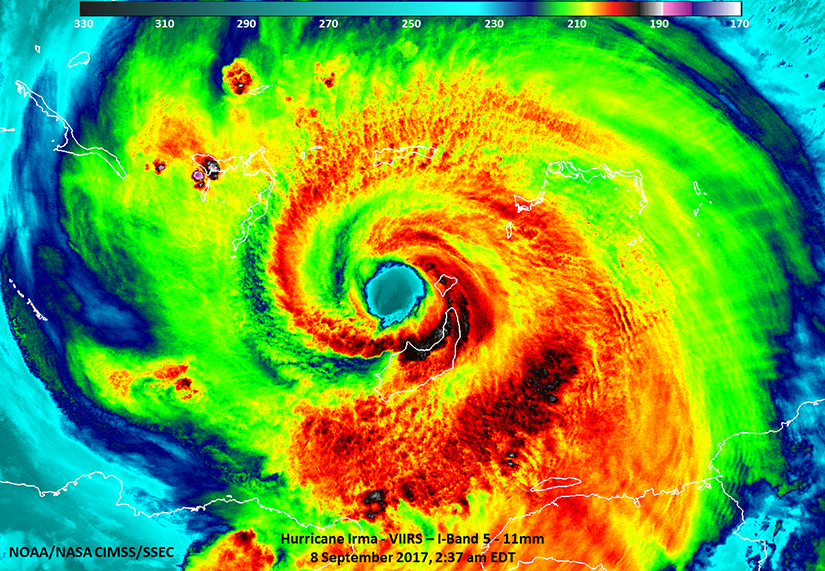 For many people, this past week has been one of extremes and emergency preparation and recuperation. Our thoughts are with those affected. Please stay safe. This and more in this week's edition of the roundup.

1. IMAGE OF THE WEEK: We hope that the intensity of both hurricanes Irma and Jose continue to lessen. NASA's fleet of satellites have been continually providing forecasters with data on both hurricanes. See the link below for the latest.

The above data set was taken on 9 September 2017 by the Suomi NPP satellite and is an infrared image showing the eye of hurricane Irma.

"The well-defined eye of Irma is visible with convection around the eye which is indicative of an intense tropical system. Strongest thunderstorms with coldest cloud tops (black) were as cold as 195 Kelvin."

Click on the link below to see map of the U.S. showing relative aerosol concentrations from the recent fires. Aerosols are key to cloud formation. Hopefully some rain will help bring relief to the smoke-choked areas.

"More than 40 million people in the three countries have been afflicted. Hundreds of villages have been submerged, and tens of thousands of homes have been destroyed. Millions of people are living in refugee camps, and vast tracts of farmland and grazing land has been inundated."

4. ECLIPSE GLASSES: Wondering what to do with your eclipse glasses now that the eclipse is over.  Certainly they make a great keepsake to remember this historical event by.  However, if you happen to have some that you wouldn't mind parting with you can consider donating them to regions around the world experiencing future eclipses.

5. WEEKLY VIDEO:  See cloud observation submissions from the past week on our Facebook page (link below). In this week's photos you will see evidence of smoke from wildfires across the U.S.