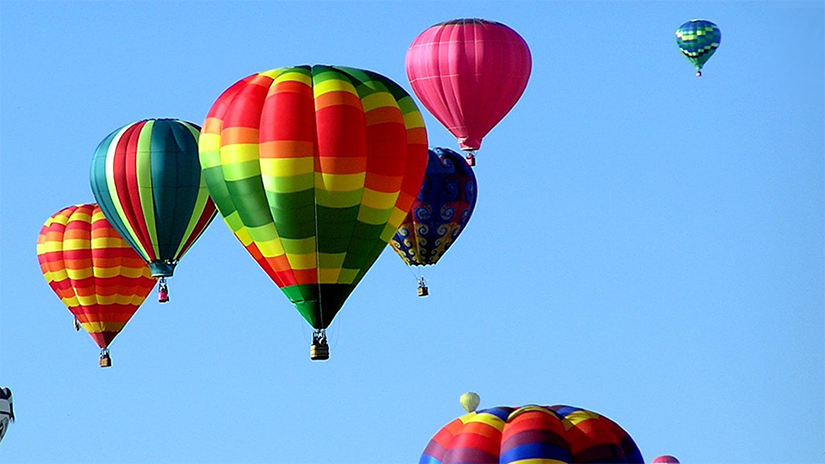 Take to the skies in more ways than one. This and more in this week's roundup.

1. IMAGE OF THE WEEK: Make plans to join us live next week (Monday, October 9th) on Facebook from Albuquerque, New Mexico. NASA GLOBE Observer will be at the Balloon Fiesta and talking about aerosols and clouds with NASA scientist, Brent Holben. You may just spot a few balloons launching as we discuss the air around you.

Remember aerosols are key to cloud formation, but too many aerosols closer to the ground can be bad for our health. So bad that NASA is sponsoring a competition that asks people to design a new aerosol sensor. (There is still time to enter this competition -- learn more in the second link below.)

2. SATELLITE: Wednesday marks the 60th anniversary of the launch of Sputnik.

"History changed on October 4, 1957, when the Soviet Union successfully launched Sputnik I. The world's first artificial satellite was about the size of a beach ball (58 cm.or 22.8 inches in diameter), weighed only 83.6 kg. or 183.9 pounds, and took about 98 minutes to orbit the Earth on its elliptical path."

Want to watch a launch this Tuesday?

"NASA will test a parachute platform during the flight of a Terrier-Black Brant IX suborbital sounding rocket at 6:45 a.m. EDT, Oct. 3, from the agency’s Wallops Flight Facility in Virginia.

The rocket will carry the Advanced Supersonic Parachute Inflation Research Experiment (ASPIRE) from NASA’s Jet Propulsion Laboratory in Pasadena, Calif. The mission will evaluate the performance of the ASPIRE payload, which is designed to test parachute systems in a low-density, supersonic environment."

Check out the link below for more information and how you can participate in this launch, both in-person and virtually.

3. ANNIVERSARY: Happy birthday to Yosemite National Park. Yosemite will turn 127 on Sunday, October 1st. National Parks are great locations for not only connecting with the outdoors, but also for doing citizen science. Planning a visit there soon? Bring NASA GO with you and share with us your findings from this iconic location.

4. DATA: We have data for you from the eclipse. Try your hand at analysis by checking out our new Eclipse Data Analysis page.

"We thank all of the amazing citizen scientists who collected clouds and air temperature data on August 21st. We received over 80,000 air temperature measurements and nearly 20,000 clouds observations from more than 10,000 observers! While our team is working on analyzing the data, we also encourage citizen scientists of all ages to try their hand at doing their own analysis."

5. WEEKLY VIDEO:  See cloud observation submissions from the past week on our Facebook page (link below).