Citizen scientists from around the world submitted nearly 4,000 photos by the end of the 2018 Land Cover Challenge. The challenge took place from National Public Lands Day on September 22 to NASA’s 60th Anniversary on October 1. People from 25 countries, representing all of the GLOBE regions, contributed their land cover observations. Additionally, eighty-eight new users signed-up and participated in the challenge.

Land Cover: Adopt-a-Pixel is the latest tool in the GLOBE Observer app. It allows participants to contribute photos of the land around them, classify their images and compare their observations to satellite data. With the observations from the Land Cover Challenge, this dataset is off to a great start.

NASA scientists hope to use data from the app to improve global land cover maps. Global maps often are not detailed enough to show small features in a landscape, such as an urban park. Other maps show a lot of detail, but not on a global scale. “Some parts of the world do have high spatial resolution maps of land cover, but these maps do not exist for every place, and the maps are not always comparable. Efforts like GLOBE Observer Land Cover can fill in local gaps, and contribute to consistent global maps,” says GLOBE program manager, Allison Leidner. 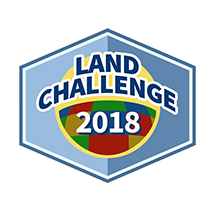 Understanding land cover is important for evaluating a community’s risk of certain disasters. For example, some types of land cover are more vulnerable to wildfires, and the way that water moves over a landscape impacts a community’s vulnerability to floods and landslides. Land cover observations can help scientists better understand the Earth processes that affect our lives.

Land scientists gathered together to thank the participants and congratulate the top observers in this video. Because of a six-way tie, there were 11 top observers, who will each receive a certificate recognizing their contributions to citizen science. Everyone who participated in the challenge will receive a badge in the GLOBE Observer app.

The 2018 Land Challenge may be over, but scientists still need your observations-- whether you are continuing to add pixels to your land cover map or are revisiting sites where you have previously taken observations in different seasons or light conditions. “These observations help us to better understand how the Earth is changing and the impacts of land cover change across our home planet,” says NASA scientist, Eric Brown deColstoun. Visit the GLOBE Observer website to find out how you can get involved.