Follow Lewis and Clark this Summer as a Citizen Scientist

In the early 19th century, Meriwether Lewis and William Clark led an ambitious expedition across the western United States. Lewis and Clark greatly expanded our knowledge of the country’s geography and biological diversity through their specimen collection, mapping of the landscape and detailed journal entries.

This year NASA and the National Park Service encourage the public to follow in these explorers’ footsteps through a new citizen science challenge from June 1 to Sept. 2. Use your smart phone and the NASA GLOBE Observer (GO) app to map land cover along the Lewis and Clark National Historic Trail and elsewhere to assist scientists studying environmental changes.

Land cover, such as grass, pavement, or trees, influences processes like the water and energy cycles and contributes to a community’s vulnerability to natural disasters. NASA studies land cover changes worldwide from space as part of its mission to better understand our home planet and improve lives.

To participate in the “GO on a Trail” challenge, download NASA’s free GLOBE Observer app from the Apple App Store or Google Play and use the app’s Land Cover tool to make observations of the landscape. Any land cover observation taken along the nearly 5,000-mile-long trail from Pittsburgh, Pennsylvania, to the mouth of the Columbia River in Washington State earns points. The top participants will receive recognition and GO on a Trail commemorative material. 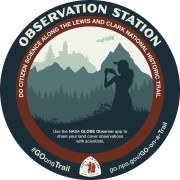 A good place to get started is at an observation station marked with a large sticker at Lewis and Clark visitor centers and museums. To navigate to sites of interest along the trail, the Lewis and Clark National Historic Trail and GLOBE Observer teams have provided an online map.

“We hope that by becoming involved with this project, people will care about the trail and become its stewards,” said Dan Wiley, chief of integrated resource stewardship for the Lewis and Clark National Historic Trail. Wiley notes that the challenge will both spark a general interest in science and show the public how it can be involved in collecting vital information for decision makers.

GLOBE Observer is an app-based citizen science program active in more than 120 countries that lets the public contribute land cover, cloud, mosquito and tree height observations to NASA and the science community. GLOBE Observer is a part of The Global Learning and Observations to Benefit the Environment (GLOBE) program, an international science and education program that provides students and the public with the opportunity to participate in data collection and the scientific process, and contribute meaningfully to our understanding of the Earth system and global environment.

NASA-funded scientists are eager to see citizen science observations of land cover along this trail, which cuts across much of North America from east to west. Because of the wide range of ecological regions along the trail, data collected during the challenge could help improve satellite-based mapping of land cover throughout the entire continent.

“We are observing and monitoring our changing home planet from space to better understand how it is changing and what are the main drivers of change,” said Eric Brown de Colstoun, a scientist at NASA Goddard Space Flight Center in Greenbelt, Maryland. “The view from the ground provided by the challenge participants is one component that helps us verify the space-based data.”

Even if you are not able to visit the Lewis and Clark Trail this summer, you can still join the GO on a Trail challenge from any of the more than 120 countries where GLOBE Observer is active by going outdoors and mapping the land cover around you. Participants can take as many land cover observations as they like, but only one observation per location will count in their point total. The top participants from beyond the trail will also receive recognition and commemorative material.

“Lewis and Clark and their team were exploring a totally new environment to them,” said Brown de Colstoun. “We invite you to get out and explore, and document the places you know and care about. Go on a trail and do science along with us!”

NASA GLOBE Observer and Lewis and Clark National Historic Trail will provide regular updates about the GO on a Trail challenge via social media throughout the summer with the hashtag #GOonaTrail.

Learn more about GLOBE Observer and download the app at: https://observer.globe.gov.