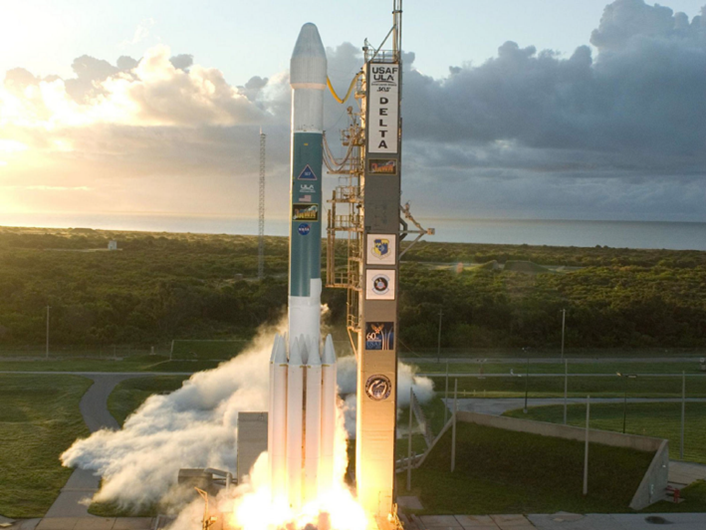 The launch of ICESat-2 from Vandenberg Air Force Base on September 18, 2015. Photo courtesy of NASA.

Three years ago, on September 15, 2018, at 6:02 a.m. PDT, NASA launched the Ice, Cloud, and land Elevation Satellite-2 or ICESat-2 from the Vandenberg Air Force Base (now the Vandenberg Space Force Base) in Lompoc, California.

Launched aboard the last Delta II rocket, ICESat-2, has spent the last three years taking measurements of our planet's frozen and icy areas, called the cryosphere. ICESat-2 helps scientists investigate our changing cryosphere in a warming climate. A benefit for all of us using the NASA GLOBE Observer, ICESat-2 also measures the heights of Earth’s trees, forests, and vegetation worldwide, providing data that can directly correspond to GLOBE Observer’s Trees Tool observations.

ICESat-2 carries an onboard laser altimeter system called the Advanced Topographic Laser Altimeter System or ATLAS. The ATLAS instrument fires laser pulses – 10,000 per second – toward the Earth from 310 miles (498 kilometers) above. Scientists can determine the heights of Earth’s features, like ice sheets, sea ice, oceans, buildings, trees ¬– among other things – by calculating the time it takes for the laser photons to leave the satellites, hit the Earth, and return to the satellite. By doing this repeatedly, scientists can see of the height of the Earth objects are changing over time. Over the last three years in space, ICESat-2 has potentially measured the heights of 1 billion trees.

When the laser photons leave the satellite and travel the 310 miles (498 kilometers) to Earth, the photons that reach the Earth create a 13-meter diameter footprint on the object’s surface.

What does this mean? If the photon hits a forested area and bounces off 25 trees contained within that 13-meter diameter footprint, the tree (canopy) height returned from ICESat-2 will be the average of all 25 trees. If there happens to only be a single tree in a photon footprint, the tree height returned from ICESat-2 will be just the height of that tree. Getting the average height of multiple trees is a lot more common than getting the height of an individual tree, but it can be done!

Below are some examples of ICEat-2 tree heights and GLOBE trees heights for groups of trees and individual trees, from Salisbury, Maryland, USA.

On January 30, 2019, the ICESat-2 satellite took tree canopy height observations at latitude 38.4318, longitude -75.6347. Within the 13-meter diameter photon footprint, there were eight trees, resulting in an average canopy height of 19.66m. The author took NASA GO tree height observations of each of these trees and chose the one that best represented the overall average of the 8 trees heights. You can see that below as 18.93 meters. This resulted in only a difference of 0.73 meters about the height of a standard desk lamp. Not bad! 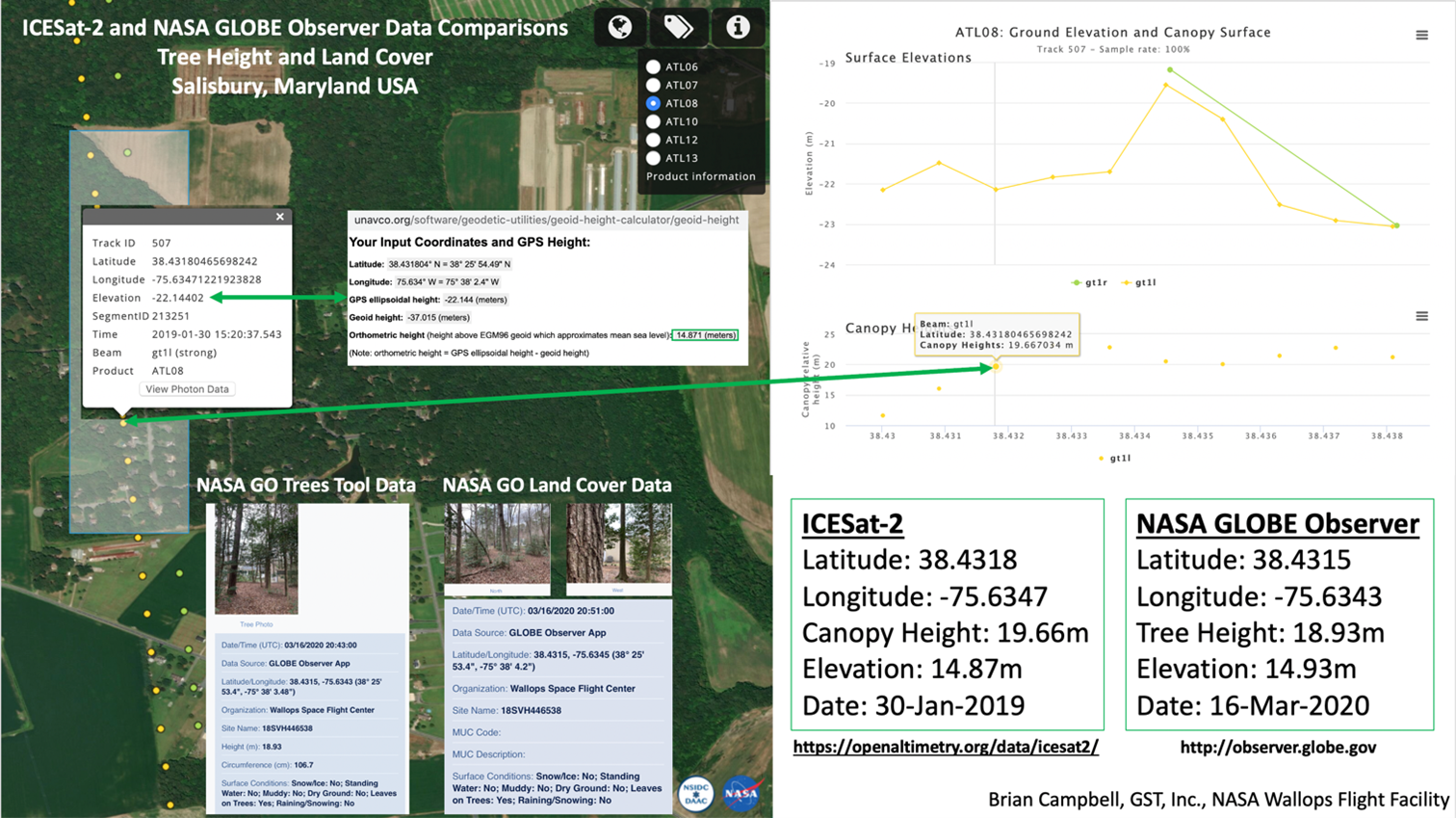 On July 31, 2019, the ICESat-2 satellite took tree canopy height observations at latitude 38.4312, longitude -75.6295. Within the 13-meter diameter photon footprint, there was an individual Bradford Pear Tree, with an ICESat-2-measured height of 19.13 meters. The author took a NASA GO tree height observation, on March 15, 2020 and got a tree height of 19.41 meters. This resulted in only a difference of 0.28 meters. Another close comparison.

On August 4, 2020, when the remnants of Tropical Storm Isaias brought winds in excess of 70 mph (112 kmh), the Bradford Tree broke in half, decreasing the height of the tree by almost 3 meters to 16.61 meters. The next step is for ICESat-2 to hopefully measure this tree again in the future so that another comparison can be done.

The last 3 years of ICESat-2 tree height measurements, combined with the 50,000+ tree height observations from GLOBE Program participants, showcases the importance of both the space-based tree height and ground-based observations. Comparing these observations provides student and professional researchers with a robust data set for analyzing tree heights on Earth. Even though we will most likely never be able to measure all 3 trillion+ trees’ heights on Earth, the data from both ICESat-2 and NASA GLOBE Observer is providing vital data that helps our planet’s researchers understand Earth’s carbon budget, tree cover, and how our planet is changing over time in response to a changing climate.

Keep looking up at the trees!