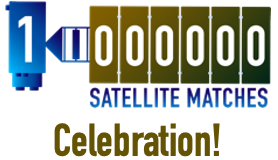 Every cloud observation submitted to The GLOBE Program goes to a team at NASA Langley Research Center to check to see if there is corresponding cloud data from satellites. With the support of the CERES and CALIPSO teams, ground observations are matched to satellite data from the same time and location. When a GLOBE cloud observation is taken within 15 minutes of a satellite observation, both points of view are coupled, creating a match. NASA has numerous satellites that make cloud observations, such as Aqua, Terra, and CALIPSO. Our interagency and international partners also make measurements with key satellites, such as GOES, Himawari, and Meteosat. By combining the ground-up view of GLOBE citizen scientists with the top-down view of satellites, scientists get a more complete view of the atmosphere. GLOBE satellite matching started in 2017. Since then, the project has received over one million GLOBE clouds observations, and recently reached over one million satellite matches!  Learn more at GLOBE Clouds Match to a Million.